Home/Events/Bread festival in Brussels
Previous Next

On 4 May 2019, the Seventh Edition of the Bread Festival was held at the Rond-point Schuman in Brussels. The event happened when the European institutions opened their doors for the European Institutions Open Day 2019.

Belgian and European citizens, policy makers, scientists, farmers, millers, bakers and chefs from many countries attended the Festival. Hundreds of breads in all forms and colors and from all regions were displayed. The objective was to show the European diversity through breads, which symbolize the different cultures.

Invited by the European Commissions to this event, DYNAVERSITY partner INRA presented one example of multi-actor research on rivet wheat (as developed in DIVERSIFOOD project). The INRA team also brought some rivet wheat breads and biscuits to taste.

Some playing games about peasant seeds and food systems (through photos and cards) were organized to engage a dialogue about these topics with the public, as engaged with the related DYNAVERSITY and CERERE projects.

The objective was also to talk to a large public about cultivated diversity, explaining and how the European projects such as DIVERSIFOOD, DYNAVERSITY and CERERE can offer complementary approaches to sustain the revival of cultivated diversity and high quality food. 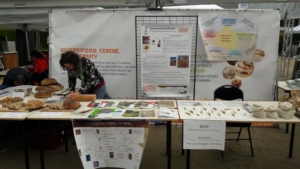 This website uses cookies to improve your experience while you navigate through the website. Out of these, the cookies that are categorized as necessary are stored on your browser as they are essential for the working of basic functionalities of the website. We also use third-party cookies that help us analyze and understand how you use this website. These cookies will be stored in your browser only with your consent. You also have the option to opt-out of these cookies. But opting out of some of these cookies may affect your browsing experience.
Necessary Always Enabled
Necessary cookies are absolutely essential for the website to function properly. This category only includes cookies that ensures basic functionalities and security features of the website. These cookies do not store any personal information.
Non-necessary
Any cookies that may not be particularly necessary for the website to function and is used specifically to collect user personal data via analytics, ads, other embedded contents are termed as non-necessary cookies. It is mandatory to procure user consent prior to running these cookies on your website.
SAVE & ACCEPT